REVEALED: The areas that have the most speeding offences... is North Wales on the list?

To save you scrolling to find the answer, the answer is YES. North Wales is at #4 on the list, with 3,054 speeding offences on average annually. But who else is on the list?

Lincolnshire is the police force area in England and Wales with the highest number of speeding offences per capita, according to research from Forbes Advisor, the price comparison and financial guidance website.

The study analysed the latest police force data from 2010 to 2020 on speeding offences for each region in England and Wales to establish where the speediest drivers commit their offences.

The data found that Lincolnshire has the highest number of speeding offences with 5.43 per 1,000 each year. Over the years examined, on average, there were 4,164 offences committed each year in Lincolnshire, although in 2020 there was a decade high 6,734 drivers caught breaking the speed limit.

South Wales ranked second with 5.23 offences per 1,000 residents, and a total of 7,030 offences across a population of 1.34 million. The year with the highest number of offences recorded was in 2018, with 8,894, which was more than three times higher than 2010 when only 2,603 drivers were charged with speeding in the region.

Dyfed-Powys in Wales rounds out the top five, with an average of 4.33 speeding offences being made per 1,000 residents. 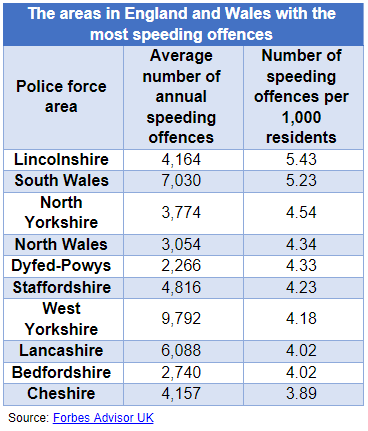 Derbyshire has the second lowest number of speeding transgressions committed by drivers, at 1.24, with an annual average of 1,318 offences from a population of 1,064,000.

Wiltshire drivers receive an average of 921 speeding tickets each year, which equates to 1.27 offences per 1,000, the third lowest on the list.

Despite London having the greatest number of speeding offences overall at 13.973, the city has the sixth lowest rate (1.55/1,000) due to the greater number of drivers who live in the capital.

Commenting on the findings, Kevin Pratt from Forbes Advisor said:

“Speeding is dangerous. Roads have speed limits for a reason, and they are limits, not targets. All drivers should stay within the limits to reduce the likelihood of injury-causing and fatal accidents.

“Get caught speeding and, if convicted, you’ll get points on your licence, and these will likely stick for four years. Rack up a total of 12 or more and you could be banned from driving. On top of that, you’ll need to declare your points when applying for or renewing your car insurance, with an increase of around 5% on the cards because you’re now perceived to be a riskier prospect.

“Lincolnshire is a rural county with plenty of long straight A-roads that might tempt drivers to put their foot down. But while there are few of us who can honestly say we’ve never bust a speed limit, the less we do it, the better.”

The study was conducted by Forbes Advisor, whose editorial team boasts decades of experience in the personal finance space. It is passionate about helping consumers make financial decisions and choose financial products that are right for their life and goals.